Travel Tips business travelers In The News On the Road

The “Smart” Luggage Ban: How to Plan For It

Smart luggage is officially dumb. At this writing, in a rare act of solidarity, all of the major U.S. airlines have joined together in banning all smart luggage without removable batteries. Additionally, Allegiant Air, Qantas, Air Canada and British Airways are new to the list. (As we know of more airlines banning smart luggage, we will update this blog.)

What Is Smart Luggage?

If you’ve born witness to people riding their motorized luggage through the airport while you’re still so old-school 2017 bipedal, or watched people charging their phones and getting free Wi-Fi via their carry-on while you’re struggling to log into Boingo, you’ve experienced “smart” luggage in real life. This sleepy luggage industry—estimated at $31.6 billion a year in 2015 by Global Market Insights—just “got woke,” as they say, with a sorely needed innovation turnaround. These soothsayers of the satchel estimate the smart luggage segment growing to $2 billion by 2024.

Beyond the USB chargers and Wi-Fi generators, the valedictorian of valises boasts global GPS tracking, self-weighing to prevent over-packing, a robotic lock, biometric opening, RFID blocking and a Bluetooth speakerphone. (Note to self: Avoid answering those medical results calls via mobile in the airport lounge.)

Prices for these traveler-friendly suitcases range from $250 to $550, so you can well imagine the frustration when travelers get their luggage turned away, especially in this time of high baggage fees prompting more bags getting checked at the gate. 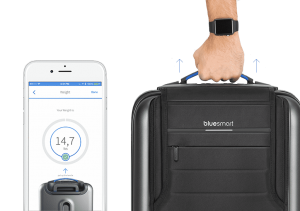 Currently, Bluesmart Luggage is trying to negotiate with the airlines and is also working on a solution, so watch their website for updates. Luggage with removable batteries gets a reprieve from the ban. Modobag, that aforementioned rideable, motorized suitcase, has a removable battery. Three other brands also had the clairvoyance to go to market initially offering removable batteries: Arlo Skye, Raden and Away.

So, the good news is, if you’re tired of playing find-the-working-outlet to charge your phone at the gate, you still have a viable alternative with any removable battery smart luggage pieces.

Check this blog for updates on future bans, or call us at 800-795-8371 for more information. We look forward to working with you.

Tags : Travel Tips, business travelers, In The News, On the Road