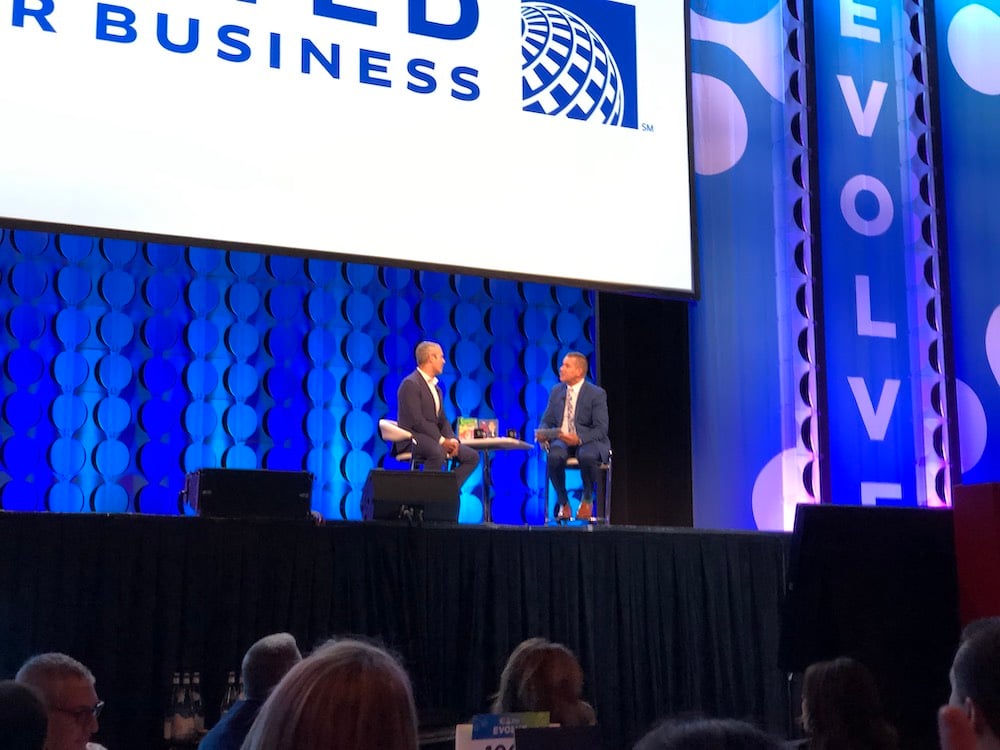 Yesterday started out business as usual on a Chicago summertime Tuesday. The skies were blue, birds were chirping, and GBTA meetings were off to a great start. Lunchtime rolled around and McCormick Place was buzzing – Bravo’s own Andy Cohen was the Convention’s luncheon speaker. Any Housewives-obsessed fan considers Andy television royalty and loyally tunes in nightly to watch him host Bravo’s “Watch What Happens Live.”

As Andy took the stage in front of thousands of excited travel managers, agencies, airline, hotel and car rental representatives, he shared some problematic news: his flight back to New York later that day had been cancelled. Well, that just would not do – the show is called “What What Happens Live,” not “Watch What Happens Delayed Because My Flight Got Cancelled And We Couldn’t Tape Live.” No, that wouldn’t do at all. And that’s when we got busy.

As our AmTrav team sat in the audience and heard Andy lament about his cancelled flight, we knew we had to help him (and the entire Bravo-universe) out. We are experts, after all. So we quickly messaged our crack team of VIP travel advisors. We almost immediately booked Andy on a new flight, grabbing the last seat and secured airport meet and greet services and called his publicist to relay the message, all within minutes of the news. Andy was delivered back to New York in time to film “Watch What Happens Live” with guests Shannon Beador and Jerry O’Connell. And we’re really glad we did because how else would we now know that Jerry knows his wife’s Bravo preferences inside out and that Rebecca Romijn’s favorite Housewife song is “Money Can’t Buy You Class” and she stans recently engaged VPR couple Stassi and Beau pretty hard? This is the type of content we need, Bravo.

We’re glad that we were able to get Andy back to NYC in time for that premium WWHL content. Plus, Baby Ben and Wacha needed their dad home in New York, not stuck in Chicago.

The COVID pandemic is finally passing and you can gather face-to-face with your friends and colleagues. Meetings and...